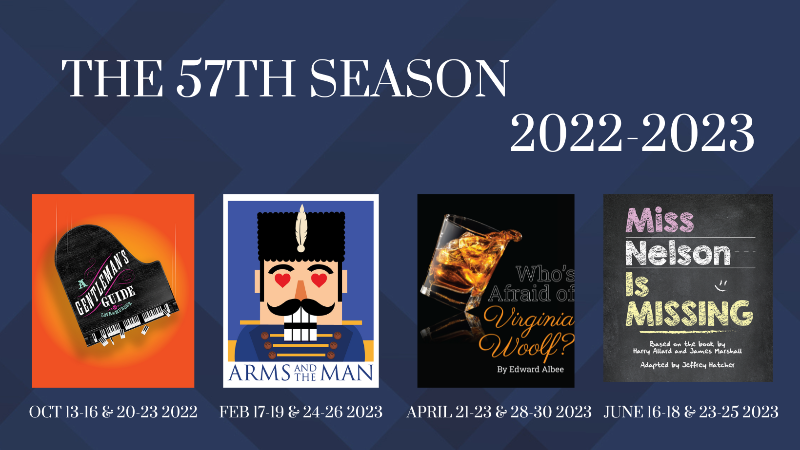 “Arms and the Man” by George Bernard Shaw.

Julianna Skluzacek is the Director and Mary Butler-Fraser the Technical Director.

A three act romantic comedy set at the end of the 1885 Serbo-Bulgarian War, a tale of love in a time of conflict that takes its toll on star-crossed young lovers struggling to separate real life from illusion

Auditions for "Who’s Afraid of Virginia Woolf?" by Edward Albee

We encourage diversity in casting. Actors of all races, ages, and ethnicities are encouraged to audition.

Jeffrey Jackson is the Director and Melanie Abraham the Technical Director.

Who’s Afraid of Virginia Woolf? examines the complexities of the marriage of a middle-aged couple, Martha and George. Late one evening, after a university faculty party, they receive an unwitting younger couple, Nick and Honey, as guests, and draw them into their bitter and frustrated relationship.

LTO is looking to cast: 2 Females and 2 Males (as described by Edward Albee)

Scene readings and more information is available at: the link below, the Owatonna Public Library, and Tri M Graphics.

House opens a half hour before show time. Your purchase will appear on your credit card statement as 'EVENTTICKETPURCHASED' even though your order confirmation and receipt will say ‘TMANIA TICKETS'. If you have questions about the purchases on your financial statements, contact us directly before initiating a chargeback through your bank.

A $2 per ticket processing fee will be applied to online orders.